A woman’s fertility is already largely established early in her life, during embryonic and fetal development and puberty. A woman’s fertility decreases as she gets older, but even during her most fertile (and otherwise healthy) years, lifestyle choices and external factors can affect a woman’s chances of having a healthy baby.

Increasing evidence shows that exposure during these specific times in her life to synthetic and natural endocrine disrupting chemicals (EDCs), can negatively affect a woman’s fertility.

Strikingly, in contrast to male infertility, there is surprisingly limited knowledge on the mechanisms by which EDCs can impair female reproduction and test methods to address this. 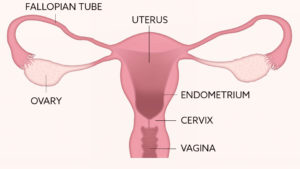 In pre-menopausal women, the ovaries produce hormones (mainly estrogen and progesterone). This is also where oocytes (eggs) develop and are being released (ovulation).

Infertility. The inability to conceive a child. About 1 in 6-8 couples have troubles getting pregnant. There are many causes for infertility and involve female (20-30%), male (20-30%) factors, both male and female or unexplained factors (40%). Female infertility may have a plethora of underlying causes, including endometriosis, disorders related to ovary dysfunction such as PCOS, but also factors like infections and lifestyle.

Polycystic ovary syndrome (PCOS) is a hormonal condition. Women with PCOS produce more male hormone than normal. Symptoms include abnormale menstrual cycles and excess hair growth. PCOS is the most common cause of infertility in women.

Premature ovarian insufficiency or failure (POI). Women have POI when the ovaries have a reduced estrogen production or release fewer eggs before the age of 40. The result of POI is infertility. Women may also experience symptoms similar to menopause, as a result of low estrogen levels. Contrary to menopause though, women may still occasionally or irregularly have a period and become pregnant.

Irregular menstrual cycles. This may in itself occur during puberty, particularly at the start of puberty as it may take one or two years for menstruaal cycles to become regular. When three or more periods are missed, this is referred to as amenorrhea. This may occur as a result of natural causes (for example pregnancy), but also as a side effect of medication such as antidepressants, or hormonal disbalance.

Ovarian cysts are fluid-filled sacs in or on the ovary. Most cysts are harmless and will disappear without treatment. Some ovarian cysts may develop as a result of endometriosis or PCOS and cause serious symptoms, such as pelvic pain and bloating.