In a recent paper, FREIA partners Terje Svingen (DTU) and Pauliina Damdimopoulou (KI) propose an approach to speed up the development and acceptance of mechanistic descriptions that are used by chemical safety assessors and regulators.

Adverse Outcome Pathways (AOPs) are a way to organise scientific knowledge and describe how a stressor – such as exposure to an endocrine disrupting chemical – can lead to a harmful health effect through a chain of linked events. The use of AOPs is gaining wide acceptance and will help to support chemical safety assessors and regulators.

Yet, only a few AOPs are thoroughly evaluated and endorsed by the Organisation for Economic Co-operation and Development (OECD), which clearly hampers their regulatory use. A major hurdle is the immense amount of work that has to be put into the development of an AOP. “Putting together the information for one key event relationship (the link between two sequential events in an AOP – red.) took me about three months altogether”, explains Eleftheria Panagiotou, PhD student involved in this work.

“We propose to focus more on smaller building blocks and rely more on existing common knowledge”, says lead author Terje Svingen. The approach will make it more attractive for scientists to contribute to AOPs, because in this way, they can focus on their own expertise and don’t have to be an expert on all facets of an AOP from molecular interactions to health effects.

Moreover, a description of a smaller AOP building block makes an excellent paper to be submitted for peer-review. Besides the scientific merit, publishing the building blocks has the added advantage that external peer-reviewers have already critically evaluated the information. This may stimulate faster endorsement of AOPs by the OECD. “It is our hope that our proposed approach will increase the pace at which the AOP knowledge base is populated with endorsed AOPs, which will certainly improve chemical safety assessment processes.”, according to the authors of this paper. 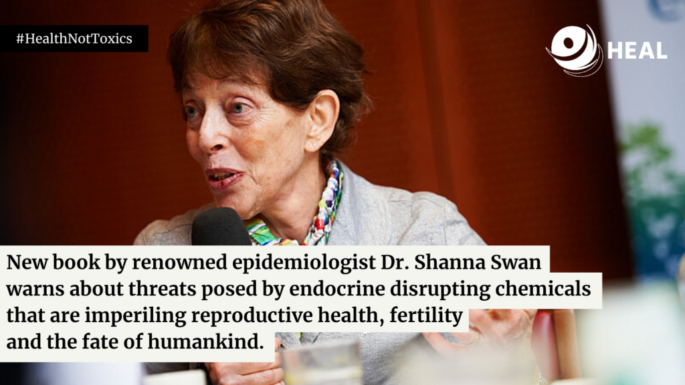 Renowned epidemiologist Dr. Shanna Swan is releasing a new book alerting about the threats posed by hormone disrupting chemicals and our modern environment that are imperiling reproductive health, fertility, and the fate of humankind. Building on more than 25 years of research on the associations between exposure to environmental pollutants and health effects, “Count Down – How our modern world is threatening sperm counts, altering male and female reproductive development and imperiling the future of the human race” is a clarion call for more protective public policies and changes in our modern way or living.

Count Down paints a bleak but important picture about how chemicals in our environment and unhealthy lifestyle practices are disrupting our hormonal balance and causing varying degrees of reproductive havoc. These trends are contributing to the current decline in sperm count, harm fertility, and are leading to long-term and cross-generational health problems even after one has left the reproductive years.

Her 2017 publication of a meta-analysis, which grabbed media attention across the world, found that among men from North America, Europe and Australia, sperm concentration had declined more than 50% in less than 40 years [3]. Dr. Swan already presented EU policy-makers with epidemiological evidence about the impacts of endocrine disrupting chemicals (EDCs) on human health in 2012 – nearly a decade ago [4]. Despite the European Union taking steps to create safe and toxic-free environments, to date these findings have yet to be translated into tangible and health-protective change to reverse current trends.

While associations between exposure to endocrine disrupting chemicals (EDCs) and adverse reproductive health outcomes are increasingly well-documented, few research projects are currently addressing them. The FREIA project – Female Reproductive toxicity of EDCs: a human evidence-based screening and Identification Approach – has started exploring just how endocrine disrupting chemicals (EDCs) affect female reproductive health, and aims at developing test methods to identify EDCs that do so [5]. Elsewhere, the ATHLETE project is aiming to better understand how the environment can impact human health, from pregnancy to adolescence, by studying the human exposome [6]. Meanwhile health groups like the Health and Environment Alliance (HEAL) and federations of professionals such as the Federation of Gynecology and Obstetrics (FIGO) are spreading more awareness around exposure to toxic chemicals during and after pregnancy, and other vulnerable life stages [7].

Count Down: How our modern world is threatening sperm counts, altering male and female reproductive development and imperiling the future of the human race is a wake-up call and a must-read for anyone concerned about the future of our collective environmental health. The book features infographics that are available upon demand, including the infographic ‘Low Doses Matter’ published by TEDX – The Endocrine Disruption Exchange and HEAL in 2019 [8].

The Federation of Gynecology and Obstetrics (FIGO), the University of California – San Francisco (UCSF) and the Health and Environment Alliance (HEAL) have launched  easy-to-use infographics for obstetricians, gynecologists and health groups to create awareness around toxic chemicals and pregnancy in a one-week social media campaign.

Exposure to toxic chemicals before, during and after pregnancy jeopardizes women’s health. The infographics launched today (in English, French, German and Spanish) illustrates 10 tips that women can use for individual lifestyle and routine changes in efforts to avoid health-harming substances, as well as advice for policymakers.

A new scientific study, undertaken as part of the US CLARITY-BPA project [1], developed a quantitative assessment of the effects of bisphenol A (BPA) exposure on mammary gland development and found a consistent pattern of non-monotonic dose response relationships [2] on a set of over 90 measurements. This demonstrates a causal relationship between exposure to BPA and the health effects observed.

“A combined morphometric and statistical approach to assess non-monotonicity in the developing mammary gland of rats in the CLARITY-BPA study” [3] was published today in the journal Environmental Health Perspectives.

The study is striking because it uses both novel and standard quantitative as well as standard semiquantitative methods to analyse the effects of BPA exposure over critical windows of development: one set of experiments from gestation to weaning, and another one from gestation until tissue harvesting up to 6 months of age. Both quantitative methods reveal clear non-monotonic dose response curves, with the administration of lower doses resulting in larger effects on the development of the mammary gland at all-time points. In addition, the study tested several hypotheses regarding whether BPA and ethinyl oestradiol (EE2, a reference estrogen) produced similar effects, and compared their respective dose-response curves.

Striking findings of the study include the following:

The quantitative method elaborated in the study responds to one of the CLARITY-BPA objectives to develop software tools fit for performing automatic evaluation of aspects of the mammary glands and determining dose-response curves. In other words, this method allows to assess several aspects of mammary gland morphology that are not accessible by manual assessments.

The mammary gland has been considered a particularly sensitive endpoint for endocrine disruption, with measurable effects seen at low levels of exposure and earlier than cancer occurrence. Testing of this endpoint as part of animal studies is thus of particular relevance for the regulatory safety assessment of EDCs.

Natacha Cingotti, senior health and chemicals policy officer at the Health and Environment Alliance (HEAL) said: “This study is yet another confirmation that exposure to even low doses of bisphenol A can be harmful to health and that it is not possible to set safe doses of exposure to this widely-used endocrine disruptor. BPA should be fully banned from consumer products and food packaging, and the tolerable daily intake needs to be further reduced.”

“As European institutions are drafting proposals for a revised framework to regulate endocrine disruptors, the promise to effectively protect people from their potential health effects must be based on the assumption that there are no safe levels of exposure, and that avoiding human exposure to such substances must be the top priority.”

A ‘questions and answers’ in relation to this study have been made available for download here.

Bisphenol A is registered in Europe as a high-volume chemical and it is used in the production of numerous plastic products or coatings that are applied in a myriad of applications for packaging or industrial processes [4]. Exposure to BPA has been linked to several significant health conditions such as reproductive disorders, increased cancer risks (e.g. breast and prostate cancer), metabolic disorders such as obesity and diabetes, altered immune system, effects on the nervous, immune, and effects on brain development and behaviour, including in children.

BPA is on the European Chemical’s Agency (ECHA)’s candidate list of substances of very high concern, due to its reproductive toxicity and its endocrine disrupting properties for human health and the environment [5].

The European Food Safety Authority (EFSA) is currently re-assessing the potential hazards of BPA in food. The conclusion of its assessment is expected later in 2020 [6].

[1] The CLARITY-BPA project is a US research project designed in 2012 to examine differences between academic-led studies and test results and those carried out under Good Laboratory Practices, which are heavily relied on by regulatory agencies, when it comes to the safety assessment of bisphenol A. Bringing together the National Institute of Environmental Health Sciences, the US National Toxicology Program, the US Food and Drug Agency, as well as independent academics, the aim of the project was to overcome recurring differences in test results about the safety of bisphenol A

With great pleasure, we announce the release of our first FREIA factsheet and infographic on endocrine disrupting chemicals (EDCs) and women’s reproductive health. Both are available in multiple languages.

It is beyond a doubt that endocrine disrupting chemicals (EDCs) impact the health of humans and the environment globally. Surprisingly, we still don’t know exactly how EDCs can harm female reproductive health.

“With this factsheet and infographic, we hope to help people understand better what EDCs are and the impact EDCs have on women’s health“, says Majorie van Duursen – coordinator of FREIA. “It also addresses where the challenges lie with regulating EDCs in Europe and how FREIA aims to contribute to protective chemical regulations“.

“We are extremely happy with such strong partners in communication and advocacy on women’s health issues. It shows the wide-spread concern about environmental impact on women’s health, beyond the academic community. By joining forces we can reach a broader audience and create more awareness for this pressing matter“, according to Van Duursen.